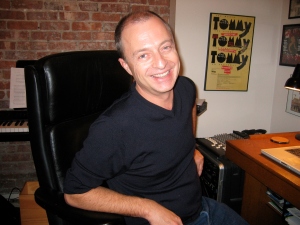 Joseph Church is a conductor, composer, arranger, pianist, and teacher of music. His career has been as varied as it has exciting, working with some of music and the theater’s most remarkable talents, collaborating with musicians, performers, directors, and technicians around the world, and guiding some of the entertainment world’s most promising talent.  He is the author of two books for Oxford University Press, Music Direction for the Stage: A View from the Podium (2015) and Rock in the Musical Theatre: A Guide for Singers (2019)

Joseph is perhaps best known for his music direction of two groundbreaking Broadway musicals, The Lion King and The Who’s Tommy. For eight-plus years (1997-2005) he was the music director of The Lion King on Broadway, and during that time was the music supervisor for the New York, London, Toronto, Tokyo, Osaka, and Los Angeles productions of the show. From 1992-1995, Joseph served as music supervisor, conductor, and vocal arranger of The Who’s Tommy on Broadway. He was the music director of the original production at La Jolla Playhouse, for which he won the Los Angeles Drama-Logue award for music direction, and was the music supervisor for the London, Toronto, Germany, and national touring companies of the show. Also with Julie Taymor, he was vocal director of Broadway’s The Green Bird. In 2016, Joseph was the music director and supervisor for the Broadway musical Amazing Grace, for which he also provided arrangements and incidental music.  Prior to that, he spent six months as assistant conductor at Broadway’s Sister Act, and two years as the associate conductor of In The Heights. He was also associate music director of the Public Theater’s production of Paul Simon’s The Capeman at the Delacorte Theater in Central Park in 2012. Other work as a music director and conductor for the stage includes Randy Newman’s Faust at the Goodman Theatre in Chicago and the La Jolla Playhouse, the original Off-Broadway, National, and Boston companies of Little Shop Of Horrors, and two seasons as music director at Radio City Music Hall. Joseph was also conductor and music director for the Grammy-winning cast albums of The Lion King and Tommy. His guest conducting includes appearances with the Long Island Philharmonic, the Gubbio Festival Opera and the Giuseppe Verdi Society Chorus and Orchestra in Umbria, Italy,the chamber orchestra Music for A Sunday Afternoon, and the Westchester Chamber Symphony. He was music director of the New York University Symphony in 2005, and has also served as assistant conductor of the Brooklyn Philharmonia Chorus and the Gubbio Festival Orchestra in Gubbio, Italy. As a keyboard player, Joseph has had long-standing relationships with several Broadway shows, including Starlight Express (his Broadway debut), Les Miserables, and The Book Of Mormon.

As an arranger and orchestrator, Joseph’s most recent work includes the new musical A Sign of the Times, premiered at the Goodspeed Opera House in 2016, and two revisions of classic musicals, The Rothschilds (aka Rothschild and Sons) at the Off-Broadway York Theatre and Rex at the Utah Festival of Opera and Musical Theatre.  Other orchestrations include The 60’s Project, directed by Richard Maltby, Gilbert and Sullivan’s The Gondoliers, commissioned by the Roundabout Theater Company, Steven Lutvak’s Almost September, songs for Lauryn Hill and the legendary songwriting team of Barry Mann and Cynthia Weil, The Gershwin’s Fascinating Rhythm on Broadway, and many other recordings and stage productions.

As a composer, Joseph recently completed, in collaboration with librettist Sheldon Harnick, a setting of three of Jean de la Fontaine’s Les Fables for chorus and orchestra. The first two sections, “The Lion In Love” and “The Peacock Who Complained To Juno,” were recorded featuring soloists Brian Stokes Mitchell, Howard McGillin, Rebecca Luker, Mary Testa, and Stanley Bahorek.  The third piece, “The Tortoise and the Two Ducks,” received its world premiere with the NYU Symphony Orchestra in May 2017, and was awarded Third Prize in the American Prize for Composition.  Joseph’s epic stage musical, The Thief, was written in collaboration with legendary Russian composer Vladimir Shainskiy and lyricist Lorraine Feather, and performed at the El Portal Theater in Los Angeles in 2007. His concert music includes, among other works, Three Romances for mixed chorus, Sonata for Two Pianos, Vibrachrome for solo vibraphone, Mock Opera, an avant-garde instrumental operetta, Soggiorno for piano, violin, and cello, the Duo for Violin and Viola, and Three Jazz Etudes. The Reel and Rondo from “As You Like It” was premiered on New Year’s Eve, 2000, by the Long Island Philharmonic, and his Shainskiy Suite, based on themes by Shainskiy, was premiered at Carnegie-Weil Hall in April 2005. For television, Joseph composed the theme music for the PBS series Character Studies. He has been composer-in-residence at New York’s Riverside Shakespeare Company and the Manhattan Repertory Theatre, and in all has written incidental music for over thirty plays, including Richard III, As You Like It, The Tempest, Antigone, Anna Christie, and The Rainmaker. He began his career as a composer for musical theater in 1981, composing the score for one of Off-Broadway’s most infamous flops, An Evening With Joan Crawford. His other musicals include Pest Control (Noho Arts Theater, 2009), Fry Canyon Pop. 2 and The Evil Of Two Lessers, a political musical about the 1988 Presidential election. His pop and theater songs continue to make the rounds in cabarets and clubs nationwide.

In 1996, Joseph Church received his doctorate in composition from New York University, where he has taught composition, conducting, and music theory since 1998. From 1996-1998 he was the co-director of the Musical Theater Program at NYU-Steinhardt. Joe’s students have gone on to successful careers as performers, composers and music directors in theater, film, and universities around the country and internationally. He holds a Master’s degree in choral conducting from the University of Illinois and a B.A. in music from Swarthmore College. Joseph has studied conducting with Paul Vermel, Tamara Brooks, and Harold Decker, composition with Menachem Zur and Todd Brief, and piano with Steven Lubin and Richard Veleta.

Joseph was born in Poughkeepsie, New York. After living in Honolulu for three years, he moved to New York City, and he has remained based there ever since. In his very little free time, he enjoys cooking, bicycling, and almost anything outdoors. His proudest and finest work is his daughter Susannah Jane Church, born in 1994.