Proper recognition for music directors: is it possible?

I recently posted the following on Facebook, and in response received an impassioned outpouring of support, more than enough to warrant further discussion:

“An open letter to publicists, theater websites, producers, and others who might have a say in this:
Please, when you announce the creative team for musicals, include the music director and/or other important members of the music team. Other designers and directors always receive mention; why is the music director so frequently omitted from press releases and other publicity materials?”

To music directors, such omissions are inexplicable. Are we not members of the primary creative triumvirate of a musical, along with the director and choreographer? Or are we not at least on a par with designers? What is it that keeps us out of the public eye?

Okay, actors get the top billing; that’s fine. They draw the crowds. People don’t buy tickets to see music directors. But they don’t buy tickets to see designers, either, and only a very few to see directors and choreographers. Only a select few music directors (I use the term here to include music supervisors) have their credit on the bottom lines of a show’s poster or front page of the Playbill on Broadway or off. More commonly, all the music credits are buried among the designers and managers in the large group with smaller print, in the middle. Music directors, music coordinators, and orchestrators usually all get the same size and similar placement. And the above-mentioned press releases, as often as not, it seems, just leave off the music staff entirely, except the composer.

Film is no different. Several respondents to the post pointed out that in the credits of most commercial films, whatever music staffers (other than the composer and music supervisor) involved in the movie are credited at the very end, after the caterers, the drivers, the lawyers, the personal assistants, the third- and fourth-unit key grips and best boys, and so on. (So, too, are the titles and credits of any songs used in the films.) These credits come long after most people have left the cinema, having lost interest, I suppose, in the film composer’s end title music (which is often the only chance for film music to really be heard, without the interference of dialogue and sound effects).

I’m not going to argue here in favor of recognition by restating the many implicit and explicit reasons music directors do indeed deserve the credit, and what’s more, could really use the publicity, as could anyone working in a freelance showbiz field. I will, instead, posit some explanations, and offer some general suggestions for remediation.

We must begin with the understanding that dramatic theater at its most fundamental is not necessarily musical (the same goes for film). Drama is a semblance of reality. Indeed, music is an intrusion on the reality, but with proper craftsmanship it is blended with drama, profoundly enhancing the emotional and intellectual effect of both creative elements. Whereas other “design” elements–scenery, props, lighting, costuming, etc.–contribute to the reality, music does not. Music is not so much a member of the immediate family as it is a distant cousin or friend who got invited to holiday dinner (and happens to be a really good cook). The most basic form of theater, including Broadway theater and its ancestors and offshoots, is non-musical. (That is not to state the obvious, which is that musicals reap the vast majority of commercial theater profits over straight plays.) Therefore, the seminal “Playbill” doesn’t have any music credits at all, except perhaps incidental music, but all the designers, directors, and producers are prominently listed. (Nowadays, the conglomerations of myriad producers listed on the front page of many Playbills shrink all the creative participants’ credits to a nearly unreadably small font size.)

Music directors, including myself, have described a feeling of “outsider-ness” when working and coexisting with other theater people. Perhaps musicians are viewed as inhabiting a rarefied, technical-aesthetic realm into which others are not entirely welcomed. Though not exactly a rule, it is undeniably a tendency that offstage and backstage at musicals, musicians hang out with musicians, actors hang out with actors, crew with crew, stage managers with stage managers, and so on. In part, this is obviously because each group has their profession in common, and plenty to talk about and share. It’s also often a physical separation. The actors are upstairs, musicians are downstairs…wait, that sounds familiar…let’s not go there, even though there was a time not too long ago when musicians entered through the kitchen. That musicians are partially ostracized, for want of a better word, accounts in part for their very low profile.

Moreover, when music does appear in a play, or in a film, it mostly does so as unobtrusively as it can, even when it is by nature intrusive, as in a “showstopper.” The goal is to keep the audience comfortably within its pseudo-realistic state, to continue to suspend its disbelief. Although is it in part the essence of music direction to uphold this axiom of interaction between music and drama, a music director’s invisibility in the process is a definite asset. In a sense, the best music director is the one that no one notices. To attain this state of magical cruciality, the music direction for a show must excel. It must flow seamlessly, effortlessly, and flawlessly in concert with the dramatic direction. If music directors want recognition for their excellence, they may have to remind everyone that they are there at all.

Despite their invisibility, as I note in my book, “Music directors…exhibit unique interpretive voices… There is a musical ‘vision,’ …made up of organizing principles and stylistic preferences and performance practices, as well as arrangements and additional composition. A music director is not just an interchangeable part, nor just someone who plays the piano really well, or just someone who happened to be available when a music director was needed, but rather an individual who can provide a unique and significant creative contribution to a production.” Yet the musical vision may not be as tangible to a lay person as is a director’s approach, unless it is deliberately conspicuous (such as overhauling a musical style or feel), which is risky, given the fragile relationship of music and drama. Perhaps music thrives best on stage with dance and movement (made evident by the preponderance of rhythmic music in the theater), where it’s okay for the music to take a more principal role and be more independently colorful. Indeed dance music and orchestration are more ear-catching to most listeners than more subtle musical elements.

Last, but not least, the reductions in size of stage orchestras and casts, the synthetic emulation of instrumental sound, the migration of live musicians out of the pit to backstage and remote locations, and the inconsistent sound designs that plague modern musical theater add little to a music director’s cause. All the hard work he or she puts in to making the music of a show sound wonderful can be instantly scuttled by an orchestra or vocal ensemble that is undersized, synthesized, poorly situated, or improperly amplified.

The lesson to be learned is that we as music directors will have to be our own advocates. Precedent and tradition are not on our side. Most people do not even understand what we do, and it’s up to us to educate them, or reeducate them. (I wrote a whole book about it, in part to rectify this ignorance.)

Music directors, first off, do your job to the best of your ability and with professionalism. Then, if you want credit, make sure you speak up. Tell everyone, and I mean everyone–the producer, the company manager, the stage manager, the publicity people, whoever you can reach out to–that you’d like to be included in the press release, and how you want to be billed in the program, and if possible, make it contractual. Make sure they have your name right. (I’m not kidding. Just last year, I was listed as “Jess Church” in a Playbill article.) Be the squeaky wheel. Fight for the right orchestra and cast size, and an appropriate and effective sound design. Use the resources available, and expand on them. Take on the role of re-educator yourself, in the way you perform your job, and the way you present yourself to your employers, potential employers, and the general public. Talk to the audience while you’re waiting for the show to start, and at intermission, and afterwards. Go to the Q&A sessions with the cast, and bring band members with you. You might not get many Q’s, but when you do, make the most of it. There are other fine suggestions among the Facebook comments. On the job and between jobs, organize and make things happen. Maybe it’s time for the resurrection of the Music Directors Committee at the union.* And yes, awards–a big issue which I have written about before on this blog and elsewhere–at very least they are worthy of discussion, and may be a necessity, if we want inclusion without exception. It’s an uphill climb, but one worth making. 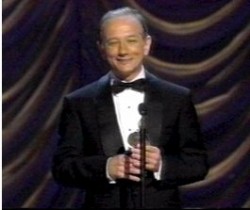 Jonathan Tunick receives his Tony for Best Orchestration for Titanic, 1997.

* Church, Joseph. Music Direction for the Stage: A View from the Podium. New York: Oxford University Press, 2015, pp. 17-27, 93-109. The history of music directors’ efforts at recognition is useful to consider in future efforts at organizing.

One thought on “Proper recognition for music directors: is it possible?”